Thevenin’s theorem states that a linear two-terminal circuit can be replaced by an equivalent circuit consisting of a voltage source VTh in series with a resistor RTh, where VTh is the open-circuit voltage at the terminals and RTh is the input or equivalent resistance at the terminals when the independent sources are turned off.

It often occurs in practice that a particular element in a circuit is variable (usually called the load) while other elements are fixed. As a typical example, a household outlet terminal may be connected to different appliances constituting a variable load. Each time the variable element is changed, the entire circuit has to be analyzed all over again. To avoid this problem, Thevenin’s theorem provides a technique by which the fixed part of the circuit is replaced by an equivalent circuit. According to Thevenin’s theorem, the linear circuit in Fig.(a) can be replaced by that in Fig. (b). (The load in Fig. may be a single resistor or another circuit.) The circuit to the left of the terminals a-b in Fig.(b) is known as the Thevenin equivalent circuit; it was developed in 1883 by M. Leon Thevenin (1857 1926), a French telegraph engineer.

To apply this idea in finding the Thevenin resistance RTh, we need to consider two cases.

CASE 1 If the network has no dependent sources, we turn off all independent
sources. RTh is the input resistance of the network looking
between terminals a and b, as shown in Fig. second image(b).

CASE 2 If the network has dependent sources, we turn off all independent sources. As with superposition, dependent sources are not to be turned off because they are controlled by circuit variables. We apply a voltage source vo at terminals a and b and determine the resulting current io. Then RTh = vo/io, as shown in Fig. third image(a). Alternatively, we may insert a current source io at terminals a-b as shown in Fig.third image(b) and find the terminal voltage vo. Again RTh = vo/io. Either of the two approaches will give the same result. In either approach we may assume any value of vo and io. For example, we may use vo = 1 V or io = 1 A, or even use unspecified values of vo or io.

It often occurs that RTh takes a negative value. In this case, the negative resistance (v = −iR) implies that the circuit is supplying power.

This is possible in a circuit with dependent sources; Example  will illustrate this.Thevenin’s theorem is very important in circuit analysis. It helps simplify a circuit. A large circuit may be replaced by a single independent voltage source and a single resistor. This replacement technique is a powerful tool in circuit design.

We must keep two things in mind while dealing with superposition theorem:
1. We consider one independent source at a time while all other independent sources are turned off. This implies that we replace every voltage source by 0 V (or a short circuit), and every current source by 0 A (or an open circuit). This way we obtain a simpler and more manageable circuit.

2. Dependent sources are left intact because they are controlled by circuit variables.
With these in mind, we apply the superposition principle in three steps:

Analyzing a circuit using superposition has one major disadvantage: it may very likely involve more work. If the circuit has three independent sources, we may have to analyze three simpler circuits each providing the contribution due to the respective individual source. However, superposition does help reduce a complex circuit to simpler circuits through replacement of voltage sources by short circuits and of current sources by open circuits.

Keep in mind that superposition is based on linearity. For this reason, it is not applicable to the effect on power due to each source, because the power absorbed by a resistor depends on the square of the voltage or current. If the power value is needed, the current through (or voltage across) the element must be calculated first using superposition.

EXAMPLE:Use the superposition theorem to find v in the circuit.


where v1 and v2 are the contributions due to the 6-V voltage source and
the 3-A current source, respectively. To obtain v1, we set the current
source to zero, as shown in Fig.(a). Applying KVL to the loop in Fig.
(a) gives 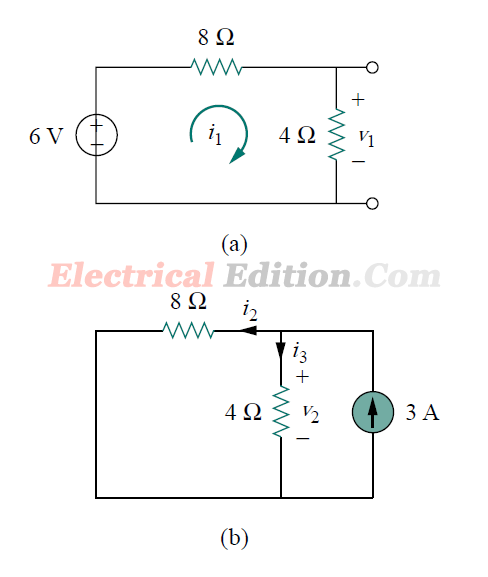 Note: While applying any theorem to a network other sources effect must be zero.so we make voltage source short circuit and current source open circuit.