What is Transfer Function In Control System ? 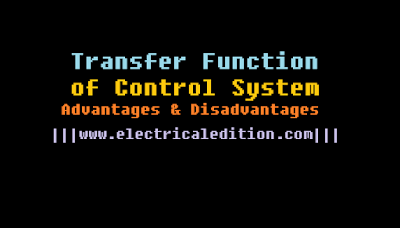 
Advantages and Features of Transfer Function

The various features of the transfer function are,

i) It gives mathematical models of all system components and hence of the overall system. Individual analysis of various components is also possible by the transfer function approach.

ii) As it uses a Laplace approach, it converts time domain equations to simple algebraic equations.

iii) It suggests operational method of expressing equations which relate output to input.

v) It is the property and characteristics of the system itself.  Its value is dependent on the parameters of the system and independent of the values of inputs. Transfer function is to be obtained for a pair of input and output and then it remains constant for any selection of input as long as output variable is same. it helps in calculating the output for any type of input applied to the system.

vi) Once transfer function is known, output response for any type of reference input can be calculated.

viii) it helps in the stability analysis of the system.

ix) The system differential equation can be easily obtained by replacing variable 's' by d/dt.

The few limitations of the transfer function approach called approach are,

i) Only applicable to linear time invariant systems.

ii) It does not provide any information concerning the physical structure of the system. From transfer function, physical nature of the system whether it is electrical, mechanical, thermal or hydraulic, cannot be judged.


Procedure to Determine the Transfer Function of a Control System

1) Write down the time domain equations for the system by introducing different variables in the system.

2) Take the Laplace transform of the system equations assuming all initial conditions to be zero.

4) Eliminating introduced variables, get the resultant equation in terms of input and output variables.