The measurement of energy is the same process as measurement of power except that the instrument not merely indicates the power or rate of supply of energy but must take into account also the length of time for which the rate of energy is continued. There are basically three types of energy meters.
(a) Electrolytic meters
(b) Motor meters
(c) Clock meters.
Out of the above, motor meters are very widely used and among motor meters also induction type watt-hour meters are more commonly used and will be dealt with here. Single phase induction type energy meter working explained including constructional details.

The construction of this meter is more or less similar to induction type watt-meter. The main alterations are the provision of only one pressure coil upon the central limb of the shunt magnet and only one copper shading band upon this limb. In addition there are two copper bands placed obliquely on the other two limbs of this magnet, their objective is to provide compensation against friction error in the energy meter (see figure). 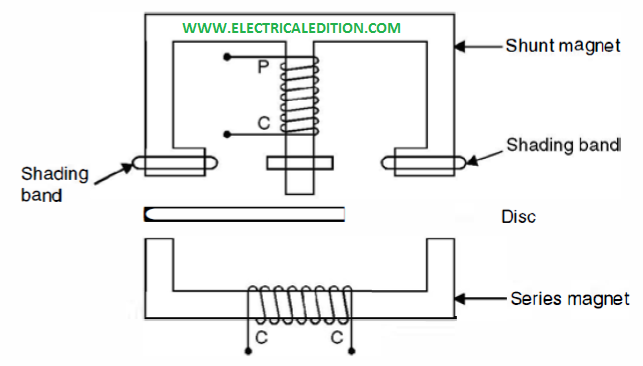 In this meter the moving system is allowed to revolve continuously instead of being allowed merely to rotate through a fraction of one revolution as in an indicating instrument. The speed of revolution is proportional to the power in the circuit. It follows, therefore, that the no. of revolutions made by the revolving system in any given time is proportional to the energy supplied. The number of revolutions made by the meter is recorded by a counting mechanism consisting of a train of wheels to which the spindle of the rotating system is geared.

The control of speed is brought about by a permanent magnet called the brake magnet.The magnet is placed opposite to the electromagnet used for providing deflecting torque and it induces currents in the disc which produces retarding torque proportional to their magnitude which latter is proportional to the speed of the rotating system. This system attains a steady speed when the retarding torque exactly balances the driving torque produced by the power in the circuit. The braking torque produced by the brake magnet depends upon the strength of the magnet.

Hence the steady speed attained by the meter for a constant driving torque TD is directly proportional to the resistance of the path of the induced eddy currents and inversely proportional to the square of the flux of the brake magnet. Therefore, it can be seen that it is very important for brake magnet to have constant magnetic strength throughout the use of the energy meter. It is to be noted that the spring control and pointer of the watt-meter have been replaced in the energy meter by a brake magnet which provides braking torque as explained above.

Using the theory of induction watt-meter.
Operating or driving torque ∝ VI cosφ
where V is the supply voltage across the shunt coil and ! the load current through the series coil of the meter and φ the p.f. angle between V and I.
Now the braking torque has been shown to be proportional to the speed N of the disc i.e.
TB ∝ N
Since for a steady speed N, the driving torque TD is equal to TB, we have N ∝ VI cosφ or power is proportional to speed N.Thus the total no. of revolutions which equals ∫N.dt is proportional to ∫VI cosφ dt   i.e. proportional to energy supplied.


What is creeping in energy meter?

Creep:In some meters a slow but continuous rotation of the disc is obtained when the pressure coils are energized and there is no load current passing through the current coil i.e. current coil is not energized. This may be due to incorrect friction compensation to vibration, to stray magnetic field or to the fact that the supply voltage is in excess of the normal voltage.

To prevent such creeping of the meter two holes or slots are cut in the disc on opposite sides of the spindle. The disc tends to remain stationary when one of the holes comes under one of the poles of the shunt magnet. In some cases a small piece of iron wire is attached to the edge of the disc. The force of attraction of the brake magnet upon this iron wire is sufficient to prevent the creeping of the disc under no load condition.

Friction Compensation In Energy Meter:
The two shading bands embrace the flux contained in the two outer limbs of the shunt magnet and thus eddy currents are induced in them which cause a phase displacement between the enclosed flux and the main gap flux. As a result a small driving torque is exerted on the disc, this torque being adjusted by variation of the position of these bands to compensate for friction torque in the instrument.
The friction compensation can be checked whether it is correct or not by connecting light load under which condition it should run at the correct speed.

Energy Meter Phase Angle Error:
It is desired that the phase angle between the applied voltage to the pressure coil and the shunt magnet flux should be at 90° which is adjusted with the help of shading band on the shunt magnet. An error due to incorrect adjustment of the position of this shading band will be evident when the meter is tested on a load whose p.f. is less than unity. An error on the "fast" side under these conditions can he eliminated hy bringing the shading hand further drawn the limb of the shunt magnet i.e. nearer to the disc.