Zr can be calculated from the following figure by applying pythogerous theorem. 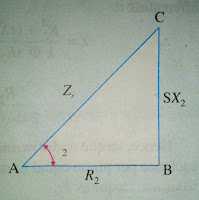 From figure we get,

Where S is slip which is defined as ratio of difference between synchronous speed and actual speed of rotor.

When the speed changes slip changes as a result torque also changes. Also the equation clear shows that torque changes with respect to change in slip but is not always directly proportional it always depends on the value of slip that is whether the slip value is low , medium or high. Now let us see this in detail.

Relation between torque and slip of a 3 phase induction motor:

Now let us see how torque changes with low , medium and high values of slip in detail.

If the slip is less than zero it will be in generating mode. As in this mode both torque and slip are negative it should be driven by prime mover so it acts as induction generator as is it used mechanical energy and converts into electrical energy. Generally this mode of operation is not used because if the induction machine is used as generator it requires high amount of reactive power to be supplied which is expensive again.

From torque equation we have torque as
T = 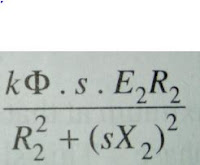 At s=0, T will be zero so the curve starts from origin.

Now at speeds close to synchronous speed the value of sX2 is small and an be ignored. so now torque T becomes

If R2 is constant the we have

T ∝ s so the torque graph will be approximately a straight line for low values of slip.

We know torque is given by,

Now differentiate above expression with respect to slip s and equate the expression to zero.

Put Y = 1/T for making calculation simpler we get,

The torque at this point is called breakdown torque or pull-out torque.

Now if the slip increases further by increasing the load then R2 can be ignored. So for large values of slip we get torque as

So in this region the torque slip characteristics is a rectangular hyperbola. This can be seen in the following figure. 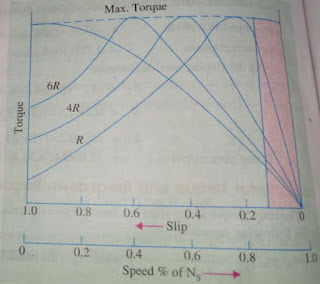 This mode is called breaking mode. In this mode the supply voltage polarities are changed as a result motor rotates in reverse direction an stops. This help to stops the induction machine in very short time.

The overall torque - slip characteristics of 3 phase induction motor is shown in the following figure. 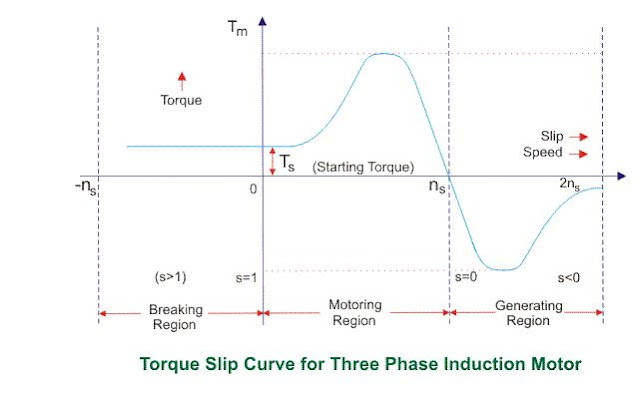