Home/ DC Motor/Electrical Braking of DC Motors | What is Braking? Types of Braking

Electrical Braking of DC Motors | What is Braking? Types of Braking

4. In electrical braking a part of electrical energy is returned to supply which helps in reducing the running cost.

5. Using electric braking the capacity of the system like higher speeds, heavy loads can be increased which cannot be obtained through mechanical braking.

Because of the above advantages we use electrical braking to stop dc motor instead of using mechanical braking.

Now let us see about electrical braking in detail.

There are three types of electrical braking. They are:

Each of the three electrical braking methods to stop dc shunt motor are discussed clearly below.

In this type of braking if the load on the dc shunt motor increases the speed of motor above the no load speed at constant excitation then the back emf (Eb)produced will be greater than the supply voltage at this stage dc shunt motor acts as generator since the motor armature current reverses its direction. So now it supplies power to the line. Due to reversal of direction of armature current as Eb  > V, armature torque is reversed and speed falls until Eb  becomes less than V so the motor doesn't completely stop in regenerative braking only speeds above no load speeds are decreased and controlled. Regenerative braking is clearly shown in the following figure. 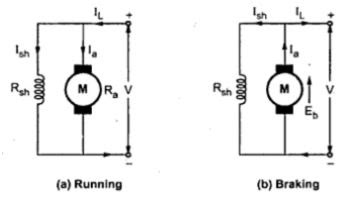 In dynamic braking we disconnect the armature of dc motor from the supply and connect a resistor to it while the field is connected to the supply as shown in the following figure. 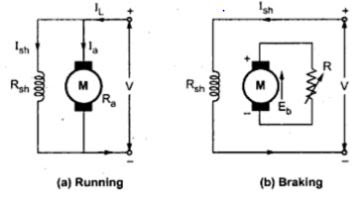 In this method the terminals of the armature of dc motor or supply polarity is reversed. So the torque direction gets reversed and hence back emf Eb and supply voltage V will be in the same direction. So now voltage will 2V which involves high inrush current to prevent this we add a resistance as shown in the following figure. 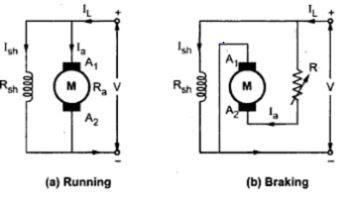 Now the motor speed decreases slowly and stops, at this point an external device is required to cut off supply as soon as motor comes to rest.Plugging gives greater braking torque as compared to rheostatic braking or dynamic braking.

Each of the three electrical braking methods to stop dc series motor are discussed clearly below.

In this the armature is disconnected from the supply and current through the armature reverses its direction and field remains connected to the supply. Care should be taken such that current direction through field doesn't changes for this purpose we reverse the field .Now dc series motor acts as dc series generator. This can be shown in the following figure. 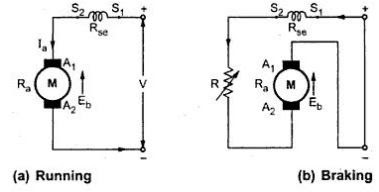 Now the kinetic energy stored in rotating parts and connected load is converted to electrical energy and dissipated through rheostat as heat and dc series motor stops.

In this method terminals of the armature or supply voltage are reversed and a resistance is added to control magnitude of braking torque. By this dc series motor stops. The figure is shown in the following diagram.Plugging gives greater braking torque as compared to rheostatic braking or dynamic braking. 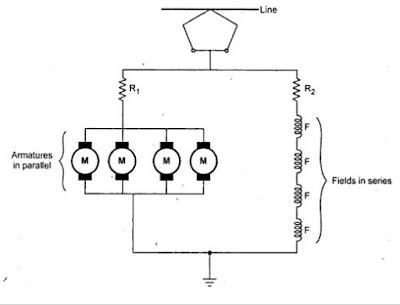 By connecting in this way back e.m.f Eb can be made greater than V and can be run as generator and torque gets reversed and speed falls till Eb becomes less than V. Hence in this way regenerative braking is done on dc series motor.

In this post we have discussed about electrical braking of dc series and dc shunt motor.