Moving Iron Instrument Working Principle : The basic working principle of these instruments is very simple that a soft iron piece if brought near magnet gets attracted by the magnet.

The construction of the attraction type moving iron instrument is shown in the below figure. 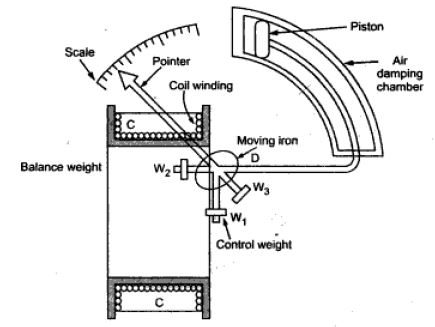 lt consists of a fixed coil C and moving iron piece D. The oil is flat and has narrow slot like opening. The moving iron is a flat disc which is eccentrically mounted on the spindle. The spindle is supported between the jewel bearings. The spindle carries a pointer which moves over a graduated scale.The number of turns of the fixed coil are dependent on the range of the instrument. For passing large current through the coil only few turns are required.

The controlling torque is provided by the springs but gravity control may also be used for vertically mounted panel type instruments.

Below shows the radial vane repulsion type instrument. Out of the other moving iron mechanisms, this is the moat sensitive and has most linear scale. 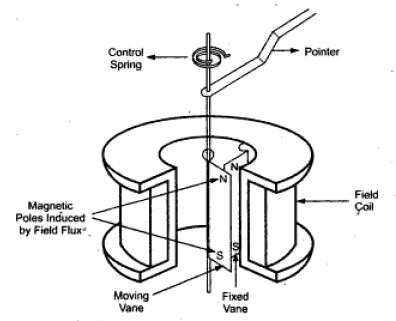 Even-though the current through the coil is alternating, there is always repulsion between the like poles of the fixed and the movable vane. Hence the deflection of the pointer is always in the same direction. The deflection is effectively proportional to the actual current and hence the scale is calibrated directly to read amperes or volts. The The calibration is accurate only for the frequency for which it is designed because the impedance is different for different frequencies. 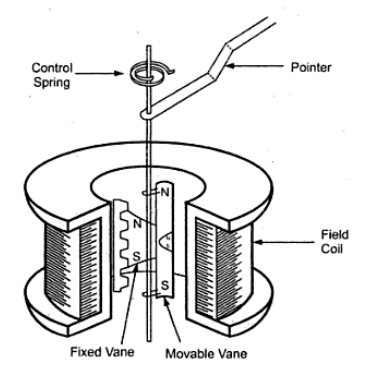