Definition of Sag In Transmission Lines

Hence ,sag determines the value of safe working tension and the minimum clearance of the conductor with respect to ground.The conductor sag should be kept to a minimum in order to reduce the conductor material required and to avoid extra pole height for sufficient clearance above ground level.

(i) Weight of conductor

(i) When supports are at equal levels 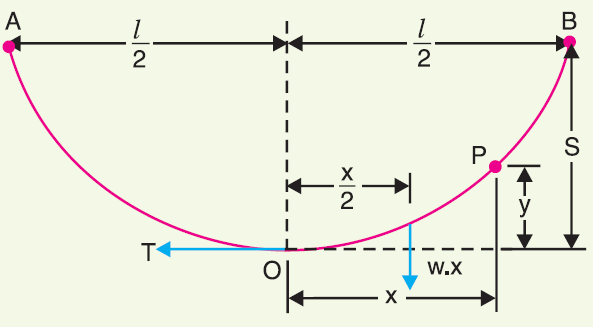 
l = Length of span
w = Weight per unit length of conductor
T = Tension in the conductor.

Now consider any point on the conductor.Lets say point 'P'.By considering lowest point O as the origin, let the co-ordinates of point P be x and y. Assuming that the curvature is so small that curved length is equal to its horizontal projection (i.e., OP = x), the two forces acting on the portion OP of the conductor are :
(i) The weight wx of conductor acting at a distance x/2 from O.
(ii) The tension T acting at O.
Equating the moments of above two forces about point O, we get,

(ii) When supports are at unequal levels


Consider a conductor suspended between two supports A and B which are at different levels as shown in the following figure.


If w is the weight per unit length of the conductor, then,

Effect of wind and ice loading on sag & tension