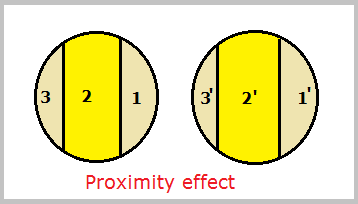 Consider two conductors placed in the vicinity as shown in figure. Let each conductor be divided in to three parts of equal cross—section. This form three parallel loops i.e., 1-1'  2-2' and 3-3'. The flux linking loop 1-1‘ is least and hence its inductance will be less which inturn causes higher current density at the inner edges of the conductor. Similarly the flux linking loop of 2-2‘ and 3-3' will be more and hence the inductance will be more which gives rise to lower current densities as we move towards the outer edge. This shows that the distribution of alternating current is nonuniform.
Facebook Twitter