Whenever a fault occurs on the system, the contacts of the circuit breaker are opened. As soon as a fault or short circuit occurs on the system, there is a heavy in rush of current through the contacts liberating heat, causing the temperature rise. Due to temperature rise, electrons are emitted from the cathode. This happens during the period of separation. The air surrounding the contacts already consists of electrons, positive ions and neutral molecules. These electrons emitted from the surface of cathode get ionized with the air. When the contacts are opened, due to ionization an arc is struck in between. A small p.d exists between the contacts and is responsible for maintaining the arc. The current continues to flow as the low resistance path is provided by an arc. It is clear from above analysis that current flow entirely depends upon the resistance of arc. 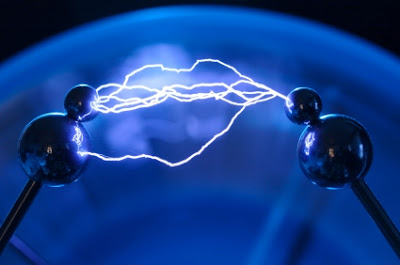 To extinguish the arc, the factors responsible for are maintenance are to be taken into consideration.

1. The are persists mainly because of the p.d developed between the contacts which is small but sufficient to maintain the arc.

2. Moreover, the ionization process which is taking place between the electrons emitted from cathode and the electrons and positive ions present in air helps the surrounding air to fill with ionized particles.

1. Firstly, the p.d between the contacts is decreased, so that the arc is avoided.
It is possible [by moving the contacts of a CB to a certain distance where p.d fails to build-up for the maintenance of are.

2. Secondly, the ionized particles present between the contacts and surrounding air are to be swept out either by cooling or by passing gases which are highly electronegative in nature.