A plain-break oil circuit breaker involves the simple process of separating the contacts under the whole of the oil in the tank. There is no special system for arc control other than the increase in length caused by the separation of contacts. The arc extinction occurs when a certain critical gap between the contacts is reached.

The plain-break oil circuit breaker is the earliest type from which all other circuit breakers have developed. It has a very simple construction. It consists of fixed and moving contacts enclosed in a strong weather-tight earthed tank containing oil up to a certain level and an air cushion above the oil level. The air cushion provides sufficient room to allow for the reception of the arc gases without the generation of unsafe pressure in the dome of the circuit breaker. It also absorbs the mechanical shock of the upward oil movement. Fig.1 shows a *double break plain oil circuit breaker. It is called a double break because it provides two breaks in series. 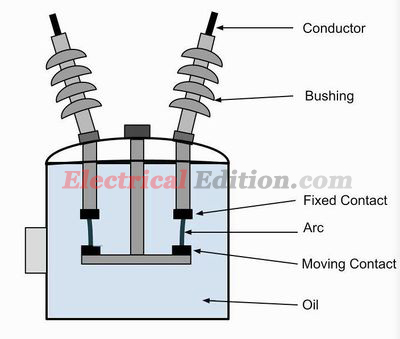 Under normal operating conditions, the fixed and moving contacts remain closed and the breaker carries the normal circuit current. When a fault occurs, the moving contacts are pulled down by the protective system and an arc is struck which vaporizes the oil mainly into hydrogen gas. The arc extinction is facilitated by the following processes :

(i) The hydrogen gas bubble generated around the arc cools the arc column and aids the deionization of the medium between the contacts.
(ii) The gas sets up turbulence in the oil and helps in eliminating the arcing products from the arc path.
(iii) As the arc lengthens due to the separating contacts, the dielectric strength of the medium is increased. The result of these actions is that at some critical gap length, the arc is extinguished and the circuit current is interrupted.

(i) There is no special control over the arc other than the increase in length by separating the moving contacts. Therefore, for successful interruption, long arc length is necessary.
(ii) These breakers have long and inconsistent arcing times.
(iii) These breakers do not permit high speed interruption.

Due to these disadvantages, plain-break oil circuit breakers are used only for low-voltage applications where high breaking-capacities are not important. It is a usual practice to use such breakers for low capacity installations for voltages not exceeding 11 kV.